It was off to Harrow last week, with Avril, Chris, Miriam and Jonny. Miriam and Jonny headed off from the start at high speed, with me, Avril and Chris in a group behind.

The course is 3 and a bit laps round, entirely on tarmac. The ‘bit’ of a lap is an extra mini loop midway through the first lap. There are a couple of long-ish but not-too-steep uphill sections on each lap. Early on in the run, we were overtaking and being overtaken by someone in a racing wheelchair, which makes you really notice the hills. Looked tough on the up, but an absolute breeze going down!

Avril, Chris and I decided that we’d run through the finish together, and lined ourselves up side-by-side, only to be told by the event team that ‘it doesn’t work like that’. Team loyalty immediately out the window, Avril dashed first over the line, and I quickly followed, leaving a surprised-looking Chris trailing behind.

Thanks very much to Avril, Chris, Miriam and Jonny for joining me on the run, and a particular congratulations to Avril, who knocked half a minute off her previous PB (see results).

I’m running a different parkrun each week of the year to raise money for Alzheimer’s Research UK. Please head over to my JustGiving page if you have a few pennies spare for a great cause. 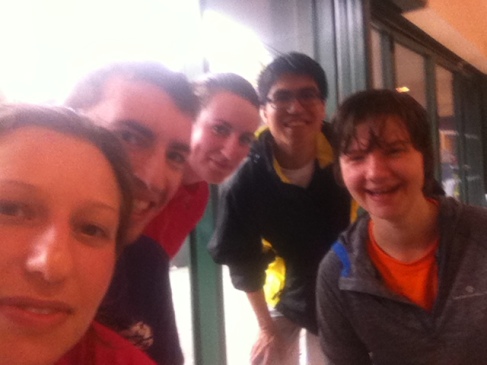 And more importantly, some post-parkrun tea and cake

…Over on the other side of London, in Mile End, parkrun announced a new partnership with GoodGym. I’m a very recent convert to GoodGym, and was pleased to hear the announcement.

GoodGym is a group that combines running with volunteering. I’ve now done a couple of group runs, where we’ve met, run 2-3k, done some gardening at a local community centre, and then run 2-3k back. I was impressed by how smooth the whole operation was, and found it a good motivator to get out and do a mid week run.

They currently have several groups in London, Bristol, Bath and Essex, and are looking to expand across the rest of the country.